Formed in 2003 Midlands based infuseDANCE delivers a wide range of performance and education work, both nationally and internationally.

Engaging participants from all sections of the community, from performing family friendly street theatre shows and working with children in schools to directing dance films in unusual venues such as prisons, the company strives to engage people in dance in accessible and fun ways.

Co-Artistic Director - Mark Anderson has been a professional contemporary dancer since 2000 and began performing street theatre in 2012 with Beingfank Physical Theatres show 'The Quiet Men'. Mark is really tall (6ft 5") so is great for finding in a crowd. He also teaches dance, choreographs and directs dance films and photography.

Dance Company. He has worked on projects with infuseDANCE since 2003. Garry is also a qualified personal trainer and holds black belts in numerous martial arts.

Anna Belyavin is a Laban trained professional contemporary dance artist who joined us in 2015. Anna is the small to Mark's tall but she has a big voice and sings in a choir.

Nick Smith is a professional contemporary dancer. Joining us in 2015, he has previously performed outdoor for Beingfrank Physical Theatre. Nick is a former teenage freestyle dance champion and is also our flexible friend having a very bendy set of legs. 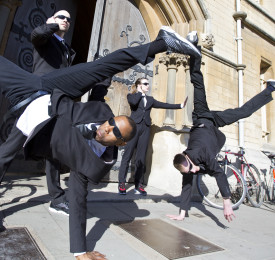 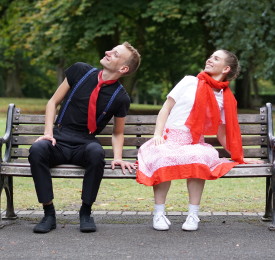