Vinny is Vince Miles who started working in Community Theatre in Buckinghamshire in the 1970s. This was followed by a degree in Drama from Exeter University and then Vince worked in Theatre in Education for three years. He began touring to schools teaching circus skills and running workshops and it was from this that the character Vinny and the show we know today came about.

For the past 20 years alongside his street performance Vince has taught circus skills, theatre skills and drama. He has led thousands of sessions and projects with all manner of groups including people with special needs, older people and the very young.

Vince is also an established actor. He regularly carries out role play work and sometimes disappears for 3 weeks to be part of a production. He is also a published playwright – his plays for Theatre in Education have been performed in Europe and the USA. 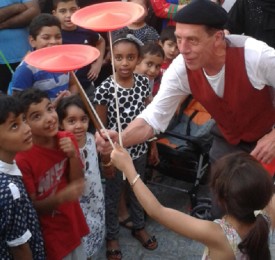