The Chipolatas were established in 1992 and are a highly acclaimed live arts performance company who have become a trusted brand and a mainstay of festivals around the world.

Blending accordion and acoustic rhythms with hip-hop and street style, their performances and inspiration are embedded in worldwide culture.

Tristan was born and raised into the UK folk arts scene in the 1970’s, touring and playing live music from an early age. Tristan is also a freelance producer and director at Cheltenham Town Hall.

Alfredo studied a degree in Physical Education (INEF Galicia) specializing in artistic gymnastics. After further study at Carampa Circus School he travelled to the Americas (Argentina, Brazil & Cuba) to continue his training as a physical clown.

Xampito began his artistic career at the Circus school ‘Circonove’ in Santiago de Compostela, Spain. From 2013-2015 he continued his studies at ‘Inrampa’ in Madrid, perfecting his performance techniques in theatre, dance, acrobatics and juggling.

Sam was born into a creative family and since moving from his childhood home in the Lake District UK, he has lived and worked in Leeds, Edinburgh, London and Barcelona. He is currently based in Australia. Sam is a passionate physical theatre maker specialising in conceptualising and creating outdoor performances in public spaces.

The Chipolatas are available as a three or four piece and can perform in many languages including English, Spanish, Italian, Portuguese and Japanese

The Chipolatas happily mix acrobatics, comedy, theatre, music and dance.
They also speak in English, Spanish, gibberish and even in Finnish! Their lovely old-fashioned way combines with the energetic present 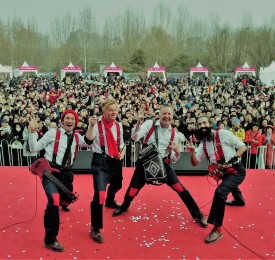