After a brief stint at The Royal Ballet School, Abi ran away to the Circus Arts.

Abigail Collins performed her first street show in 1995, and has toured widely ever since. Abi has worked extensively in Europe and Australia, and has also performed in Brazil, Colombia and Japan. She can perform her entire show in French, Spanish and Portuguese, and has a smattering of Dutch and German.

She holds a BA in Theatre Arts and a Masters in Drama Studies and is currently writing two novels. 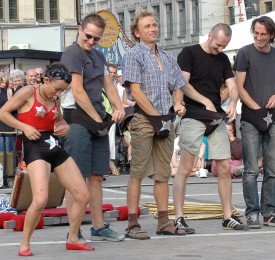