The Production Shed promotes contemporary circus throughout the UK.

Project_Vee came to life in 2015, after Matt learned to weld, and the pair decided to create an outdoor homage to the Soviet act, remixed for the 21st century. The show was commissioned by Without Walls, Salisbury Festival & Out There, and has toured festivals across the UK and beyond ever since.

Circus Geeks began life as a blog run by Arron Sparks, with contributors from across the world of circus. It spilled onto the stage in 2013, when Arron created Beta Testing- a show based on the blog’s most popular posts. The show toured widely, including headlining the Udderbelly Festival at Southbank Centre in 2015. Since childhood, Arron watched grainy VHS tapes of soviet-era circus performances, smuggled over the Berlin wall. These included legendary juggling troupe, the Four Afanasjews- whose spinning machine had platforms which were hoisted high into the air with wires from the bigtop's rig. Arron is a graduate of the National Centre for Circus Arts and now lives in Glasgow.

PanGottic is run by Matt Pang, maker of brilliant street theatre and crazy contraptions. His previous work includes solo shows, Thingamabob and Pang On! He has toured street theatre festivals across Europe.

Matt is based in Bristol. He is a graduate of Circomedia, where he now leads the street-theatre module on the BA (hons) course.

Arron has 3 Guinness World Records in Yo-Yo. He took up Yo-Yo during the craze of 1998, and when others moved onto Tamagotchis, Arron stuck it out. He set up the British Yo-Yo Association. He competed in the 2005 World Yo-Yo Championships, coming 4th. If he doesn’t have the country’s largest collection of Yo-Yos, God help us all.

One of Matt’s shows, Long Shot, features a contraption which fired a dart, which is meant to spear itself into an apple on top of his hat. During one show, due to a wardrobe malfunction, the hat dropped backwards and he speared himself. He continued the show, with a little dribble of blood running down is forehead.

Acts by The Production Shed 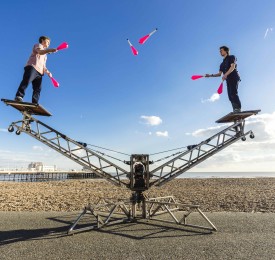