Gandini Juggling is a group of virtuoso jugglers, using the juggling arts to create sophisticated shows that are in demand all over the globe from tours of Indonesia to the Edinburgh Fringe and sell out spells at the Royal Opera house. They are considered by to be the crème de la crème of dextrous creativity and between them hold several juggling world records. The company’s artistic directors are Sean Gandini and Kati Yla-Hokkola.

Sean grew up in Havana and as a child was fascinated by magic and mathematics. He became a regular performer in London’s Covent Garden and has since spent the last 25 years researching and contributing to all aspects of juggling. Sean is a prolific creator and his work also extends to choreography and directing. He regularly teaches in many of the world’s leading circus schools.

Kati is one of her generation’s iconic jugglers. Renowned as one of the leading innovators in dance/juggling, her ability to combine movement and complex coordination is second to none. A national rhythmic gymnastics champion, Kati’s juggling has a calm precision which comes from 25 years of throwing whilst standing on one leg.

They are joined in the core group of Gandinis by Owen Reynolds and Inake Sastre. Many of the world’s most skilful jugglers form the wider company touring under the Gandini name.

Probably the best juggling troupe in the world 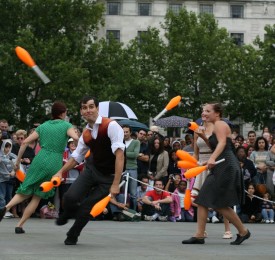